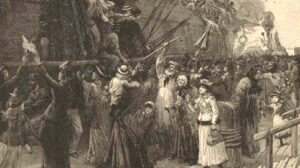 From 1841 to 1850, immigrationthe act of entering a country of which one is not a native to become... from Europe totaled more than 1.7 million, including 780,000 Irish, who fled poverty and death from the potato famine of 1845-49. To divert the Irish exodus and help settle Canada, the British offered bargain fares of 15 shillings, instead of 100 shillings. Thousands took advantage and went to Canada on what became known as the “coffin ships” because of their high death rates. Once in Canada, many Irish crossed the border and headed to the nearest major city, usually Boston or New York. Failing European economies and political upheaval contributed to further immigration.

The Industrial Revolution began in England in the late 18th century and gradually spread across Europe. Fueled by proceeds from natural resources and the African slave trade in the Caribbean, South America and the former colonies, Europe became a center of manufacturing, producing everything from finished cotton goods, to machinery, to luxury items. By the middle of the nineteenth century, the Industrial Revolution had taken hold in the German states, France, and Belgium. Thousands of laborers were displaced by the rapid transformation from agriculture to manufacturing economies. The economic and social changes brought about by these changes caused masses of people to emigrate to the U.S.

The post-Civil War industrialization in the U.S. with its railroads, steel mills and textile factories, brought increased demand for labor that was satisfied by European immigration. However, with each wave of immigration, the U.S. imported a European ethnic hierarchy that came to define “whiteness” in the social and political life of Europeans immigrants in this country, and in effect, racialized whites.

“Uncle Sam’s Lodging House” cartoon from an 1882 edition of Puck magazine shows a boarding house filled with immigrant laborers; the Irishman is the only disruptive immigrant. Puck was a humor and political satire magazine that favored German Americans and pilloried Irish Americans. Some of its targets included New York City’s Irish-controlled Tammany Hall and the Catholic church.