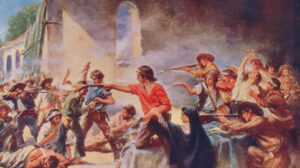 The 13-day Battle of the Alamo in 1836 was a pivotal point in Texas’ war for independence from Mexico. Nearly all of Texas rebels-primarily American settlers and Tejanos (native Mexicans who fought for Texas)-perished in the battle at the Alamo mission in San Antonio. Despite the loss, the Texans went on to win the war.

Soon after Texas won independence from Mexico in 1836, the state legalized slaveryan extreme form of human oppression whereby an individual may "own" another person and the.... Free blacks and mulattoes were forbidden from entering Texas, which had once been a safe haven for runaways. In the 1830s, as the westward push of white settlements and of slavery brought significant numbers of new settlers into the region, conflicts between whites and Mexicans, who had long occupied the land, increased. In Texas, authorities used the Texas Rangers to protect the large land and cattle operations established after statehood from insurgents li e Juan Cortina, a wealthy Mexican-born rancher who became a symbola sign or attribute that stands for something else, to which it may or may... of militant resistance to Anglo racismthe use of race to establish and justify a social hierarchy and system of power.... Authorities in Texas systematically disenfranchised Mexican Americans, and prevented them from serving in local government, while vigilantes, with broad support from the white communities, terrorized Mexican Americans in southern Texas, where they were most numerous. Statehood was delayed for New Mexico, primarily because of its Mexican American political leadership, however Mexican Americans remained the majority population until the end of the nineteenth century.

The war with Mexico also affected the political balance between pro and anti-slavery states. If slavery was allowed in the newly acquired Mexican territory, slaveholding states would acquire greater representation in Congress. Even with a much smaller population, the South sent and suffered greater casualties in the Mexican War than the North, which had disapproved of the effort and sent less than half as many troops. Not surprisingly, southerners felt the Wilmot Proviso, a proposal by a Pennsylvanian legislator to ban slavery in all territory acquired as a result of the Mexican War, was unjust, since the South had risked more lives to win the Southwest.

… These have connived with each other…to persecute and rob us, without any cause, and for no other crime on our part than that of being of Mexican origin…
– Juan Nepomuceno Cortina Goseacochea, also known as Juan Cortina

Juan Nepomuceno Cortina Goseacochea, a wealthy Mexican cattle rancher also known as Juan Cortina, fought in the Mexican Army during the Mexican-American War. Following the war, Cortina and fellow Mexican Texan (Tejanos) ranchers found that the large portions of their land in the Rio Grande Valley were now within U.S. borders. As local white authorities tried to appropriate their land, Cortina organized a private army of Tejanos to resist eviction from their land. His battles against the U.S. Army, the Texas Rangers and the local militia of Brownsville, Texas, were known as the Cortina Troubles.