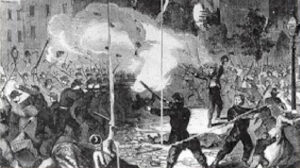 In 1863, federal troops were sent to quell racea recent idea created by western Europeans following exploration across the world to account for... rioting in New York, when Irish immigrants attacked the city’s black population after learning that the new conscription law meant that they would likely be drafted to fight a war on behalf of blacks. The controversy grew more intense when it was revealed that conscripted men could buy a waiver for $300, which led to charges that it was a “rich man’s war but a poor man’s fight.” Black neighborhoods were burned and many blacks were lynched from lampposts. After four days of rioting, the bloodshed finally ended with more than 100 killed. Similar riots took place in Philadelphia and Detroit.

By 1860, war was inevitable. Anti-slavery forces in the northern and southern slaveholding states were at an impasse over the balance of political power, with southern states threatening to secede from the Union with the election of Abraham Lincoln. The Civil War years were a particularly contentious time in the U.S. The debate over slaveryan extreme form of human oppression whereby an individual may "own" another person and the... was more an issue of economic competition than racial oppression; southern slave owners feared the loss of wealth and political power, while European immigrants in the North were afraid that newly emancipated slaves would compete for jobs.

“The mind does not take its complexion from the skin.
– Frederick Douglass

Frederick Douglass was an American abolitionist, editor, orator, author, statesman and reformer. Born a slave in Talbot County, Maryland near Tuckahoe Creek, he managed to escape bondage and became influential in ending slavery in the U.S. In 1863, Douglass conferred with President Abraham Lincoln on the treatment of black soldiers, and with President Andrew Johnson on the subject of black suffrage.