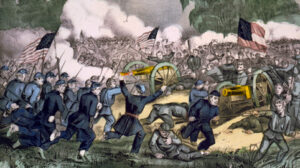 In early July 1863, Union and Confederate forces fought the Battle of Gettysburg in and around the town of Gettysburg, Pennsylvania. It was the bloodiest battle of the Civil War-both sides combined suffered 50,000 casualties. Confederate General Robert E. Lee ended his invasion of the North at Gettysburg and the battle marked a turning point in the war. It was also the site of Abraham Lincoln’s famous speech, the Gettysburg
Address.

The Civil War conflict began April 12, 1861 when southern forces attacked a federal armory at Fort Sumter in South Carolina. Eleven southern states seceded and formed the Confederate States of America, led by Jefferson Davis. Northern states formed the Union, which was led by President Abraham Lincoln and the Republican Party, and opposed the expansion of slaveryan extreme form of human oppression whereby an individual may "own" another person and the.... In the first year of the war, the Union took control of the border states and established a naval blockade as both sides raised large armies. In September 1862, Lincoln issued a preliminary Emancipationfreedom from legalized slavery gained by most enslaved persons of African descent immediately following the... Proclamation, which proposed freeing the slaves in rebellious states. This made the abolitionThe abolition movement consisted of organized efforts to do away with legalized slavery, in the... of slavery a primary goal of the war-one bitterly opposed by the Copperheads, northern Republicans who opposed the war. Emancipation ensured that Britain and France, which had by then abolished slavery, would not intervene to help the Confederates and also allowed the Union to recruit blacks for reinforcements-a resource the Confederacy did not exploit until it was too late.

By 1864, the Union’s advantages in manpower, industry, finance, political organization and transportation were overwhelming the Confederacy. Union General Ulysses S. Grant fought a bloody series of battles with Confederate General Robert E. Lee in Virginia in the summer of 1864. Lee could not replace his casualties and was forced to retreat to Richmond, Virginia. By that time, Union General William Sherman had captured Atlanta and marched through the Carolinas to the sea. In 1865, the Confederacy collapsed when Lee surrendered. The 13th Amendment to the Constitution was passed abolishing slavery.

The restoration of the country was part of a highly contentious postwar effort known as Reconstruction. Although Congress established the Freedmen’s Bureau to assist former slaves in the transition to freedom, several southern states enacted black codes to curb their rights. The federal government eventually overturned these codes, but several decades later many of these same states passed Jim Crow laws, which would set the tone for black-white relations for decades to come. These laws restricted the economic and civil rights of blacks. All public places were segregated and tactics of intimidation eroded personal freedom for African Americans; among the tactics used, lynching was the most important technique. Between 1890 and 1910, the peak period of white backlash, all southern and border states disenfranchised the vast majority of blacks, who just a few years before had for the first time elected black officials to Congress and local and state office.

In the quote above, taken from a letter written in July 1862 to Horace Greeley, the influential editor of the New York Tribune, Abraham Lincoln responded to criticism by Greeley that implied that Lincoln’s administration lacked direction and resolve. As a draft of the Emancipation Proclamation lay in his desk drawer, Lincoln’s response revealed that at the height of the Civil War his primary concern was preserving the Union, not freeing the slaves.