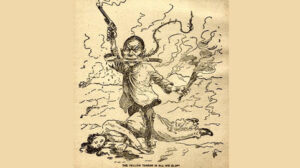 The “yellow terror” also called the “yellow peril” coincided with the Chinese Exclusion Act of 1882. At the time, labor leader Samuel Gompers argued that, “the superior whites had to exclude the inferior Asiatics, by law, or if necessary, by force of arms.” In the early 1900s Asians were often lynched by vigilante groups, much like blacks in the South. Newspapers in the West, especially those owned by William Randolph Hearst, frequently used the phrase “yellow peril” in referring to Asian Americans.

When President Rutherford B. Hayes signed the Chinese Exclusion Treaty in 1880, he effectively reversed the open-door policy set in 1868 and placed strict limits on the number of Chinese immigrants allowed into the U.S. as well as on the number allowed to become naturalized citizens. Congress then enacted the Chinese Exclusion Act in 1882, prohibiting for ten years both immigrationthe act of entering a country of which one is not a native to become... from China and the naturalization of Chinese immigrants already in the U.S.

Aroused by the belief that low-paid Chinese workers were taking jobs away from whites, anti-Chinese violence had flared, influencing the passage of the bill. 40,000 Chinese immigrants had entered the U.S. in 1881; within a year those numbers had dropped to just 23. In 1886, Seattle saw anti-Chinese violence kill five people, and parts of the city were wrecked; in the aftermath, 200 Chinese were forced to board ships bound for San Francisco. Leaders of the riot promised that within a month the city would be wiped clean of Chinese.

In the 1890 censusAn official count of a population and collection of demographic data. The United States Census..., Chinese and Japanese racial categories were added. Two years later, the Chinese Exclusion Act was extended for an additional ten years by Congress, which also added a requirement that all Chinese workers in the United States register or face deportation.

Proportions of the 1890 census data were used as the basis for restrictive immigration policies in the 1920s.

“Our Constitution is color blind, and neither knows nor tolerates classes among its citizens”
– Justice John Harlan, from Plessy V. Ferguson decision

The 1896 case of Plessy v. Ferguson involved a Louisiana law requiring whites and blacks to ride in separate railroad cars; in its decision, the Supreme Court ruled that the law did not violate the equal protection clause of the 14th Amendment. The Court concluded that public facilities could be segregated based on race, codifying the “separate but equal” doctrine. Writing for the majority, Justice Brown wrote that the law did not “stamp the colored race with a badge of inferiority” and that any such suggestion is “solely because the colored race chooses to place that construction on it.’ In his dissent, Justice John Harlan argued, “Our Constitution is color blind, and neither knows nor tolerates classes among its citizens.”