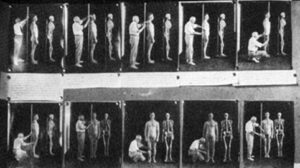 In 1910, Harry H. Laughlin (shown at left measuring individuals) became superintendent of the Eugenicsfrom Greek eugenes meaning wellborn; The eugenics movement of the late nineteenth and early twentieth... Record Office (ERO) research facility at Cold Spring Harbor, New York. He ardently pursued the goals of the institution and regularly lectured to various groups on eugenics (the science of improving human populations by selective breeding) around the country. Laughlin provided extensive statistical testimony to Congress supporting the Johnson-Reed Immigrationthe act of entering a country of which one is not a native to become... Act of 1924 and was eventually appointed as an “expert eugenics agent” to the Committee on Immigration and Naturalization.

The worldwide Eugenics movement gained strength in the U.S. at the end of the 1890s, when theories of selective breeding espoused by British anthropologist Francis Galton and his protégé Karl Pearson, gained currency. Connecticut was the first of many states, beginning in 1896, to pass marriage laws with eugenic provisions, prohibiting anyone who was “epileptic, imbecile or feeble-minded” from marrying. The noted American biologist, Charles Davenport, became the director of biological research at a station in Cold Spring Harbor in New York in 1898. Six years later the Carnegie Institute provided the funding for Davenport to create the Station for Experimental Evolutionthe transformation of a species of organic life over long periods of time (macroevolution) or.... Then, in 1910, Davenport and Harry H. Laughlin took advantage of their positions at the Eugenics Record Office to promote eugenics.

Madison Grant, a lawyer known more as a conservationist and eugenist created the “racialist movement” in America advocating the extermination of “undesirables” and certain “race types” from the human gene pool. He played a critical role in restrictive U.S. immigration policy and anti-miscegenation laws. His work provided the justification for Nazi policies of forced sterilization and euthanasia. He wrote two of the seminal works of American racialism: The Passing of the Great Race (1916) and The Conquest of a Continent (1933). The Passing of the Great Race gained immediate popular success and established Grant as an authority in anthropology, and laid the groundwork for his research in eugenics.

The ERO concluded after years of gathering data on families that the poor were the main source of the “unfit. Davenport and other highly regarded eugenicists such as psychologist Henry H. Goddard and conservationist Madison Grant started a campaign to address the problem of the “unfit.” Goddard, using data based on his Kallikak family research, lobbied for segregation, while Davenport preferred immigration restriction and sterilization as primary methods. Grant, the most extreme of the three, agreed with both of his colleagues, and even considered extermination as a possible solution.

A major influence on the eugenics movement was Herbert Spencer, an English philosopher and prominent political theorist. He is best known as the father of social Darwinism, a school of thought that applied the evolutionist theory of “survival of the fittest”-a phrase coined by Spencer-to human societies.

By the 1900s, the scientific community’s understanding of racea recent idea created by western Europeans following exploration across the world to account for... was both essentialist-defining each race by certain biological and social characteristics-and taxonomic (hierarchical). Scientists were struggling with the concept of race in divergent ways. Ales Hrdlicka and Earnest Hooten, two prominent physical anthropologists also trained as physicians, were influential at a time when the field focused mostly on anatomy and physiological variation.

Charles Davenport earned a Ph.D. in biology in 1892 from Harvard, and later became an instructor of zoology there. As a biologist, he pioneered the development of quantitative standards of taxonomythe science of describing and classifying organisms.. A follower of the biometric approach to evolution which had been developed by Francis Galton and Karl Pearson, Davenport was also on the editorial committee of Pearson’s journal, Biometrika. After Mendel’s laws of heredity were “rediscovered”, Davenport became a strict convert to the Mendelian school of geneticsthe study of human heredity, its mechanisms and related biological variation. Heredity may be studied.... His 1911 book, Heredity in Relation to Eugenics, was a major work in the history of eugenics. Along with an assistant, Davenport also studied the question of miscegenation, or, as he put it, “race crossing” in humans. In 1929, he published Race Crossing in Jamaica, which purported to give statistical evidence about the dangers of miscegenation between blacks and whites.

“The real problem of the American Negro lies in his brain, and it would seem, therefore, that this organ above all others would have received scientific attention.”
– Ales Hrdlicka

Perhaps the most influential American physical anthropologist of his day, Ales Hrdlicka was responsible for the direction of natural history museums in the U.S. Born in what is now the Czech Republic, Hrdlicka received his medical education in the U.S. He practiced medicine only for a short while, after which, in 1903 he began to organize the division of physical anthropology at the U.S. National Museum-what became the Smithsonian Institution-in Washington, and was its curator from 1910 to 1942. At the Smithsonian, Hrdlicka amassed one of the largest collections of human bones in the world. Although he conducted anthropological research on various groups, including black and white children, and juvenile inmates from New York asylums, his research focused mostly on Native Americans. The above quote was excerpted from the Committee on the Negro findings published in the American Journal of Physical Anthropology in 1926.