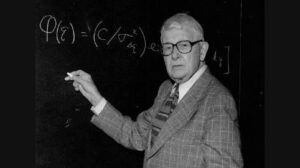 Sewall Wright (shown left), was an American mathematician, who along with Ronald Aylmer Fisher (R.A. Fisher), a British statistician and prominent eugenicist, and John Burdon Sanderson Haldane (J.B.S. Haldane), a Scottish geneticist, evolutionary biologist and socialist, were the key figures in the neo-Darwinian synthesis theory, which ushered in modern evolutionary concepts of racea recent idea created by western Europeans following exploration across the world to account for.... Their work was essential to the contributions of other neo-Darwinian scientists.

Since the 1940s, evolutionary scientists have rejected the concept of race based on physical characteristics-or phenotype-in determining the variety of races. Evolutionary and social scientists observed that established racial categories and definitions lacked taxonomic validity. They argued that definitions of race were imprecise, arbitrary, derived from customs, had many exceptions and gradations and that the number of races observed varied according to the cultureThe full range of shared, learned, patterned behaviors, values, meanings, beliefs, ways of perceiving, systems... examined. For example, categorizing human populations by skin color was no more useful than using hair color or hair texture, or eye color, or nose size, lip size, or height. Instead, they theorized that analyzing human genotypic and phenotypic variation was better interpreted in terms of populations and clines.

One of the leading scientists in advancing modern evolutionary theory was Sewall Wright. His work on inbreeding, mating systems and genetic drifta mechanism for evolutionary change resulting from the random fluctuations of gene frequencies (e.g. from... made him, along with R. A. Fisher and J.B.S. Haldane, the founders of population geneticsthe study of human heredity, its mechanisms and related biological variation. Heredity may be studied... theory. Their work was the basis of modern evolutionary synthesis also referred to as neo-Darwinian synthesis.

The inbreeding coefficient and F-statistics, which are standard tools in population genetics, were developed by Wright. His contribution to the mathematical theory of genetic drift led to its designation as the Sewall Wright effect; this theory represents cumulative changes in genea unique combination of bases (see base pairs) that creates a specific part of our... frequencies that arise from random births, deaths, and Mendelian segregations in reproduction. Wright was involved in a longstanding argument with Fisher, who was convinced that most populations in nature were too large for the effects of genetic drift to be important.

Another important scientist involved in reconceptualizing genotypic and phenotypic variation was anthropologist C. Loring Brace. Brace was responsible for the observation that these variations, insofar as they were affected by natural selectiona mechanism for evolutionary change favoring the survival and reproduction of some organisms over others..., migration or genetic drift, were distributed along geographic gradations called clines. This conclusion drew attention to the fact that phenotypic-based descriptions of races ignore numerous other similarities and differences, such as blood type, which do not correlate highly with race. This led anthropologist Frank Livingstone’s to conclude that “there are no races, only clines.”

Theodosius Dobzhansky, an American geneticist born in Russia, is known for his basic work in genetics and conducted much of his research with fruit flies. His writings include Genetics and the Origin of Species (1937), a summary of contemporary knowledge of genetics; Evolutionthe transformation of a species of organic life over long periods of time (macroevolution) or..., Genetics, and A (1955); and Mankind Evolving: The Evolution of the Human Species (1962), which explores cultural and biological evolution.

“There are no races, only clines.”
– Frank B. Livingstone

After graduating from Harvard with a degree in mathematics, Frank Livingstone earned a masters and doctorate in anthropology from the University of Michigan, where he became a professor and chairman of the anthropology department. He was best known for his research in Liberia and West Africa and his work on sickle cell disease. His research focused on genetic variation in modern human populations and he wrote about the uselessness of the term “race” as applied to human evolution. Livingstone died in 2005.