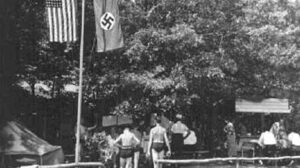 By 1938, Nazi sympathizers who formed the German-American Bund in the U.S. conducted a summer youth camp (shown left) on Long Island for its members. The Bund reached its peak in 1939, when its members gathered at Madison Square Garden ostensibly to celebrate George Washington’s birthday, an event attended by 20,000. Despite the turnout, the group’s membership never exceeded 25,000. At the start of World War II, most Bund members were placed in internment camps, and some were deported at the end of the war.

After the stock market crash in 1929, thirteen million people were out of work. This triggered the Great Depression, which lasted through the late 1930s. The worldwide economic devastation that ensued fostered a climate of racial and ethnic tension both in the U.S. and Europe. Between 1933 and 1945, Nazism in Germany gained currency, as people tried to place blame on others for the global economic depression. The beliefs were embraced by some Americans, and Nazi factions arose in the U.S. One such party, the German-American Bund, which thrived during the mid-1930s, openly espoused Nazi ideology.

Jews did not fit easily into U.S. “racial” groups or within the black-white dichotomy. Yet from the white viewpoint, Jews were racially different, set apart by their non-Christian religious customs, urban neighborhoods, professional endeavors and preference for marrying other Jews. However, Jews did not conform to the stereotypes many in the U.S. had about racial minorities. Although there were many poor Jews who immigrated to America after 1880, many others were economically successful and upwardly mobile merchants and tradesmen. While whites found Jews racially different from themselves, they were somewhat more accepting of Jews than they were of African Americans. Still, many Jews perceived the racial bias and tried to conform to American standards of “whiteness” by Anglicizing their names and customs with varying degrees of success. They also confronted quotas in many of America’s most prestigious universities that limited the admission of Jewish students.

“The question goes deeper than just suits. It is a racial protest. / have been worried for a long time a about the Mexican racial situation. It is a problem with roots going a long way back, and we do not always face these problems as we should.”
– First Lady Eleanor Roosevelt comments in her newspaper column on June 16, 1943

In the spring and summer of 1943, tension between Gls stationed in California and young Mexican Americans turned violent. U.S. soldiers raided places in Oakland and Venice, California, and attacked zoot suiters, stripping off their clothes. In Los Angeles, in early June a reported dispute with Mexican Americans set off five nights of rioting. In its June 21, 1943 issue, Time magazine reported, “The police practice was to accompany the caravans of soldiers and sailors in police cars, watch the beatings and jail the victims.” Fearing mutiny, military officials declared the downtown district off limits to military personnel, which restored order.