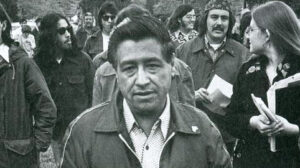 Credit: Cesar Chavez photo taken in 1974 by Jerry Lewin, found in the book Nosotros: The Hispanic People of Oregon, Essays and Recollections, edited by Erasmo Gamboa and Carolyn M. Buan

The social and political unrest of the Civil Rights movementLegal and other efforts led by African Americans against racism and segregation and for the... characterized and defined the decade of the 1960s. From Martin Luther King’s March on Washington in 1963, to the televised police assaults on blacks in Birmingham, Alabama, with police dogs and water hoses, to the bombing of a black Birmingham church that killed four young girls, to the murders of civil rights workers Goodman, Chaney and Schwerner in Mississippi, the decade became a testament to the social, political and economic realities of violent and deep-seated racial hatred. In 1964, the massive Mississippi voter registration drive “Freedom Summer” increased black registered voters from 7% to 67% of those eligible in the five years after civil rights organizers first arrived.

Three weeks in March of 1965 marked the height of the modern civil rights movement, culminating in the Selma-toMontgomery March for voting rights. On “Bloody Sunday,” March 7, 1965, some 600 civil rights activists marched east on U.S. Route 80 out of Selma. They had traveled only six blocks to the Edmund Pettus Bridge when state and local lawmen attacked them with billy clubs and tear gas and drove them back into Selma. Martin Luther King, Jr. led a “symbolic” march to the bridge two days later on March 9. Civil rights leaders then sought court protection for a third, full-scale march from Selma to the state capitol in Montgomery; Federal District Court Judge Frank M. Johnson, Jr. ruled in favor of the demonstrators. Two weeks later, on Sunday, March 21, around 3,200 marchers set out for Montgomery, walking 12 miles a day and sleeping in fields. Their ranks had swelled to 25,000 by the time they reached the capitol on Thursday, March 25. Less than five months later, President Lyndon Johnson signed the Voting Rights Act of 1965.

“The law is clear that the right to petition one’s government for the redress of grievances may be exercised in large groups…and these rights may be exercised by marching, even along public highways.”
– Federal District Court Judge Frank M. Johnson’s decision allowing the Selma march

John Lewis (on right in trench coat) and Hosea Williams (on the left) led marchers across the Edmund Pettus Bridge. On March 7, 1965, protesters began the first of three attempts to march from Selma, Alabama, to Montgomery, the state capital, in support of voting rights. The first time marchers were stopped at the Pettus Bridge by a police blockade. Fifty marchers were hospitalized after police used tear gas, whips and clubs against the marchers. Dubbed “Bloody Sunday,” it was only after the third try that the marchers reached Montgomery. The protest was a catalyst for passage of the Voting Rights Act five months later.