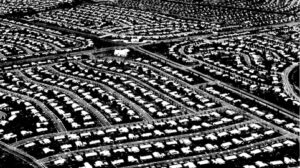 In 1947, William J. Levitt developed single-family, tract housing using federal funds. Built as affordable housing for World War I| veterans and their families, the first Levittown was built in suburban Long Island, New York. Similar developments for whites only were built in Pennsylvania and New Jersey between 1952 and 1963. The Levittowns became the model for real estate developers across the country and helped establish a pattern of racial discriminationpolicies and practices that harm and disadvantage a group and its members. in housing that persists even today.

Returning World War II veterans spurred a population and housing boom driven in part by benefits from the Gl bill. The economic demands of the post-war boom and the burgeoning Civil Rights movementLegal and other efforts led by African Americans against racism and segregation and for the... led to conflicts over discrimination in housing, jobs and education. The Federal Housing Administration, which instituted policies that reinforced patterns of segregation, routinely denied low-interest loans to non-whites. The experience of fighting for freedom in Europe and then returning to a country where discrimination and opportunities were limited fostered discontent for returning black Gs. The legacy of post-war economic discrimination contributed to the wealth gap between whites and non-whites that we see today. One of the most important factors that contributed to the wealth gap was the federal housing policy. This policy endorsed redlining and discrimination in sales, financing and homeowners insurance, is reflected in the unequal rates of home ownership even today.

In the U.S., blacks, Mexicans, Chinese and Japanese immigrants were targets of discrimination in employment and property ownership. African Americans lost their homes through foreclosures during the 1930s and 40s, many of them victims of fraud and deception. In the South, many blacks were victims of exploitative tenant-sharecropper systems that kept them in perpetual debt. Since Chinese Americans were effectively denied citizenship until the 1950s, their access to jobs was limited, and they were prohibited by law from owning property. Although Japanese Americans were able to buy property, much of their wealth was confiscated during World War II when they were forced into internment camps. For Mexican Americans, opportunities for employment were largely limited to guest worker programs. The bracero program, which began in 1942 and officially ended in 1964, allowed them temporary entry into the U.S. as migrant workers in farms throughout California and the Southwest.

Credit: Kenneth and Mamie Phipps Clark, with permission of the University Archives, Columbia University in
the City of New York

“A racist system inevitably destroys and damages human beings; it brutalizes and dehumanizes them, blacks and whites alike.”
– Kenneth Clark

Sociologist Kenneth Clark was instrumental in the Brown V. Board of Education school desegregation decision when he testified about the detrimental effects of racism on African-American children based on research he and his wife Mamie (shown above) conducted in the 1940s. Clark became famous for the “doll” experiments, in which children were presented with the choice of black doll and a white doll. In virtually every case, the white doll was selected even by the black children, who Clark theorized had internalized racial prejudice.