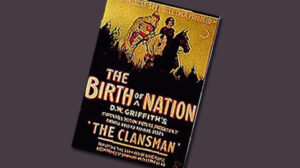 The story of the Civil War and Reconstruction was told through the stories of two families-one from the South, the other from the North-in D.W. Griffith’s film, The Birth of a Nation. A southerner and the son of a Confederate cavalry officer who returned from the war a broken man, Griffith blamed his own troubles on Reconstruction and southern blacks. The film depicts that resentment by contending that radical Republicans and “uppity” blacks were the cause of all post-war social, political, and economic problems. The film was based on a Ku Klux Klan propaganda piece called The Clansman, which was written by Thomas Dixon.

Beginning in 1896, immigrants from southern and eastern Europe, mainly Italians, Jews and Slavs from the Austro-Hungarian Empire, were the largest groups arriving in the U.S. The reception they received was markedly different from earlier northern European immigrants. They experienced employment and housing discriminationpolicies and practices that harm and disadvantage a group and its members. that resulted in many living in urban “ghettos” in the Northeast and the Midwest. Many Americans saw them as “racially” different and inferior. The ideology of racea recent idea created by western Europeans following exploration across the world to account for... was applied to Southern and Eastern Europeans because they were physically and culturally different from the Northern Europeans and Scandinavians. That racial worldview dominated thinking about human differences and was extended to European populations in the U.S. as well. European intellectuals had begun to see their own populations as divided into races, with attributes that made them unequal.

In the U.S., the migration of African Americans from the rural South to the urban North was prompted by the growing violence and oppression of Jim Crow laws in the post-Reconstruction South and greater job opportunities in North. The black migration began in the 1890s as African Americans left for cities such as Chicago, Detroit, Cleveland, Philadelphia and New York. The single largest movement of African Americans occurred during World War I, when approximately 500,000 people moved from rural areas and small towns in the South to cities in the North and the Midwest as wartime employment in factories peaked. Even in the North, blacks encountered violence at the hands of whites, who resented competition for jobs and black economic success. Segregation and discrimination in housing, education and jobs was pervasive in the North as well. Nevertheless, from 1916 through the 1960s, more than six million blacks left the South for other regions of the U.S.

By the end of the 19th century, AfricanAmerican scholars began to tackle the denigrated images of blacks that dominated the U.S. Perhaps the most prominent advocate for “Negro uplift” was William Edward Burghardt Du Bois. In the first half of the twentieth century, W.E.B. Du Bois was arguably the most prominent activist on behalf of blacks. A contemporary of educator Booker T. Washington, Du Bois took issue with Washington’ acceptance of segregation and political disenfranchisement. Though Du Bois consistently argued against racial inequality, he nevertheless subscribed to elitist hereditarian views. In a collection entitled The Negro Problem, he wrote that the “talented tenth” of African Americans should be encouraged to have children, as a way of improving” the race. Du Bois argued that racialism was the philosophical belief that differences between the races existed biological, social and psychological. He asserted that racism involved using those beliefs to advance the idea that one race was superior to all others, and distinguished between the “conditions” of racism and “racism” itself.