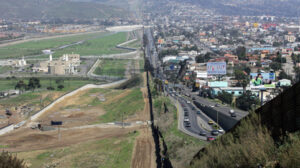 A small fence separates densely-populated Tijuana, Mexico, right, from the United States in the Border Patrol’s San Diego Sector. The Immigrationthe act of entering a country of which one is not a native to become... and Naturalization Service estimated that the total undocumented population residing in the U.S. totaled seven million in 2000.

The U.S. experienced increased immigration from former Soviet states and Eastern Europe after the collapse of the Soviet Union in the late 1980s. But since the Immigration Reform and Control Act (IRCA) of 1986, also known as the Simpson-Mazzoli Act, U.S. immigration law and anti-immigrant sentiment has largely been focused on illegal immigration from Central America. The 1986 law was intended to reduce the large number of U.S. immigrants who were either illegal or unemployed. Employers who knowingly hire an illegal immigrant may be subject to financial and other penalities. However, the law included a one-year amnesty provision for illegal immigrants who had lived and worked in the U.S. since January 1982. The 1986 IRCA amnesty offered more than 2.7 million immigrants and others without appropriate visas the opportunity to apply for and receive legal citizenship.

With the passage of the North American Free Trade Agreement (NAFTA) in 1992 and increased immigration from Central America, some states and local municipalities created legislation to discourage Mexican immigrants from settling in their communities. Many localities actively practiced discriminationpolicies and practices that harm and disadvantage a group and its members. against recent immigrants, especially those from Central America, by establishing ordinances that restricted day laborers from congregating and finding adequate housing, thereby limiting economic opportunities. In 2006, Congress proposed several measures designed to deal with the problem of illegal immigration and the resulting backlash.

“People, I just want to say, you know, can we all get along?”
– Rodney King, in the wake of violence in Los Angeles in April 1992, following the acquittal of the four police officers accused of beating King.

In 1991, Rodney King, an African American, became the focus of national attention after a violent confrontation with Los Angeles police was caught on videotape by a bystander. Racial tensions between the African-American community and the LAPD over the acquittal of the four officers charged with police brutality led to several days of rioting. Korean store owners were particularly hard hit. Many blacks felt Korean store owners were exploiting their neighborhoods, and felt lingering resentment over an incident in which a Korean grocery store owner fatally shot a 15-year-old black girl in a dispute over a container of orange juice. The store owner was fined $500 for killing the girl.