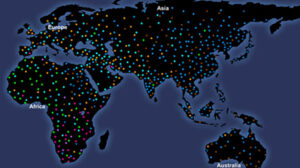 Credit: Science Museum of Minnesota, based on the work of Dr. Kenneth Kidd

According to current research, the African continent is the ancestral home of modern humans. Scientists studying patterns il human genetic variation have observed the greatest amount of human genetic diversity in African populations. Genetic variation outside of Africa-in Europe and Asia-includes some, but not all, of the genetic variation found in Africa, which suggests that between 140,000 and 290,000 years ago, Homo sapiens migrated out of Africa to colonize Europe, Asia and the Americas. This “Out of Africa” theory is supported by studies of mtDNA, the Y chromosomeLong strands of DNA found inside the cell nucleus. Human cells each contain 23 pairs..., portions of the X chromosome, and some but not all autosomal (non-sex determining) regions, as well as the archaeological record.

The role of geneticsthe study of human heredity, its mechanisms and related biological variation. Heredity may be studied... in human variationthe differences that exist among individuals or among groups of individuals regarded as populations. Anthropologists... had to evolve before the “Out of Africa” theory of ancestry could be fully understood. Perhaps the most significant scientific development in helping to further understand human biological variationrefers to observable differences among individuals and groups that have resulted from the processes of... was the discovery of genes and the growth of genetic research. In 1905, British biologist William Bateson coined the term “genetics,” building on Gregor Mendel’s work, which was not initially understood. Alfred Sturtevant developed the first map of a human chromosome in 1913. Five years later, R.A. Fisher’s work combined genetic research with evolutionary biology, but it wasn’t until 1944 that scientists Oswald Theodore Avery, Colin McLeod and Maclyn McCarty were able to isolate DNA as human genetic material.

“The classification into races has proved to be a futile exercise.”
– Luigi Luca Cavalli-Sforza

One of the important geneticists of the 20th century, Stanford’s Italian-born population geneticist Luigi Luca Cavalli-Sforza summarized his work in Genes, Peoples, and Languages, which challenged the concept of classifying human populations into races in the same way that birds and other species are classified. Cavalli-Sforza was one of the first to suggest that the genetic history of the human species might be viewed by examining the genetic variation present in modern populations.