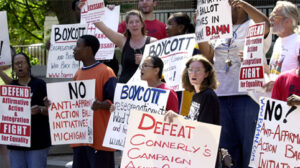 In 1961, President John Kennedy issued executive order 10925, which created the Committee on Equal Employment Opportunity and mandated that federally funded projects take “affirmative action” to insure that hiring and employment practices were free of racial bias. A few months after outlining the concept of affirmative actionFirst established by the Federal government in 1965, this legal mandate consists of special actions... in a speech delivered at historically black Howard University, President Lyndon Johnson issued executive order 11246 in 1965, and established enforcement guidelines and documentation procedures for federal contractors. In 1967, the order was amended to cover gender discriminationpolicies and practices that harm and disadvantage a group and its members.. In 1969, then President Richard Nixon initiated the “Philadelphia Order”, the most forceful plan to date to guarantee fair hiring practices in construction jobs, using the city’s craft trades as a test case.

Initially, civil rights laws had sought to right discriminatory wrongs. Equal opportunity was frequently seen as proportionate representation based on censusAn official count of a population and collection of demographic data. The United States Census... data. Discrimination was not only found in the intentional act of a real estate agent or an employment office, it was also found in housing patterns and wage rates. However, in the decades that followed, affirmative action became synonymous with “reverse discrimination” as whites began to resent opportunities afforded nonwhites. In the late 1970s, the courts began to strike down affirmative action programs that were designed to give minorities an opportunity to compete for federal contracts, by challenging programs that utilized “quotas.”

The change in the way affirmative action came to be viewed took a different tone in the courts. In discrimination lawsuits filed in the 1970s, racist intent was almost always denied by defendants. But the courts often relied on statistical patterns as evidence of discrimination. However, the standard for proving discrimination subsequently changed so that intent became the basis for determining discrimination. By the 1980s, the courts had so narrowly defined discrimination that the onus was on the victims of racial bias to prove the intent of employers and institutions that had exhibited racismthe use of race to establish and justify a social hierarchy and system of power... in their policies and practices. Groups other than African Americans filed discrimination lawsuits on the basis of statistical proportionality: Hispanics, Asian, Native peoples, women, the handicapped. And in each instance, the census provided the basis to determine who was being given equal treatment and opportunity, and who was not.

“The dream of a nation of equal citizens in a society where race is irrelevant to personal opportunity and achievement would be lost in a mosaic of shifting preferences based on inherently unmeasurable claims of past wrongs”
– Justice Sandra O’Connor, from the Croson opinion

In 1989, the Supreme Court ruled in City of Richmond v. J.A. Croson Co., that “strict scrutiny” standard was to be applied to state and local affirmative action programs. In a 6-to-3 decision, the Court held that “generalized assertions” of past racial discrimination did not justify “rigid” racial quotas for the awarding of public contracts.