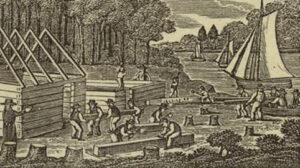 In 1607, a group of settlers first landed on Jamestown Island, approximately 60 miles from the mouth of the Chesapeake Bay. Almost immediately, the colonists were under attack from the Algonquian natives. Disease, famine and the continuing Indian attacks took their toll on the population. In the winter after Jamestown colony leader John Smith departed for England in 1609, only 60 of the original 214 Jamestown settlers survived. Though Jamestown struggled for decades, there were some years of prosperity following the marriage of Pocahontas, daughter of the Algonquian chief Powhatan, to John Rolfe.

For a brief period during the 16th century, Virginia was the only English colony in North America. The first settlement was established in 1587 on Roanoke Island, in what is now North Carolina. By the 1600s, the Virginia colony comprised the entire coast of North America, including the shoreline of Acadia, and a vast area of inland Canada. In 1607, settlements were established at Jamestown and at the Popham colony, but only Jamestown survived. By 1620, the portion of Virginia north of the 39th parallel became New England. Despite the emergence of other English colonies in North America, the Virginia colony was by far the most influential in the 17th and 18th centuries in defining the country’s social and cultural character leading up to the Revolutionary War. It was in Virginia that colonial governments first established slave codes, which became more extensive and were later adopted by other colonies.

Stricter slave codes emerged in Virginia after Bacon’s Rebellion in 1676, when wealthy planters decided to abolish indentured servitude and establish permanent slaveryan extreme form of human oppression whereby an individual may "own" another person and the... for Africans, fearing that class conflict would undermine their tobacco plantation holdings. They gradually eliminated the importation of indentured servants from England in favor of enslaved Africans. Though many of Virginia’s slave codes addressed specific conflicts-one law enacted in 1701 offered a bounty for killing a runaway named Billy, who was alleged to have robbed and destroyed crops-most were designed to aggressively curb the movements and activities of slaves. Social and cultural separation of blacks and whites was started when Virginia planters began establishing laws based on the assumption that Africans were an inferior racea recent idea created by western Europeans following exploration across the world to account for....

…l do hereby further declare all indented servants, negroes, or others, free that are able and willing to bear arms…”
– Lord Dunmore

The 4th Earl of Dunmore, John Murray, governed the province of New York from 1770 to 1771, and the colony of Virginia from September 25, 1771 through the start of the American Revolution. While governor he led a series of campaigns against the Indians (primarily the Shawnee), which became known as “Lord Dunmore’s War”. His purpose was to strengthen Virginia’s claims in the West, particularly in the Ohio region. However, some believe he conspired with the Shawnee to instigate the war in order to deplete the Virginia militia in order to make them less effective in a revolution against Britain. Dunmore continually clashed with Virginia’s colonial assembly after 1774, and he left Williamsburg on June 8, 1775. He retreated to his hunting lodge, and took refuge on a British warship when the war began. Realizing he would never regain control of Virginia, he returned to England in 1776.