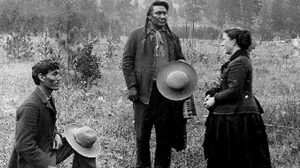 Pioneer ethnologist Alice Fletcher was a leader in the movement to bring Native Americans into the mainstream of white society. She was fascinated by the cultureThe full range of shared, learned, patterned behaviors, values, meanings, beliefs, ways of perceiving, systems... of the Omaha Indians of Nebraska, and in 1881 she arranged to live with and study them. She became close to several members of the tribe, and even adopted one of them, Francis La Flesche, as her son. She became an influential proponent of the breakup of tribal lands into individual holdings, known as allotments, and in 1882, was employed by the Bureau of Indian Affairs to make a survey of all Indian lands for this purpose.

The Black Hills, in North and South Dakota, along with 40 million more acres of Lakota land, were reclaimed by Congress in 1877 with a vote to repeal the 1868 Fort Laramie Treaty. The following year, Congress sent one of its first field teams to Zuni Pueblo in the Southwest as part of the newly created Bureau of Ethnology, whose mandate was to document the culture and society of Native Americans. Ethnologist Frank Hamilton Cushing, the leader of the team, became a member of the Zuni tribe, anticipating 20th century anthropological methods.

By 1883, a group of clergymen, government officials and social reformers calling itself “The Friends of the Indian” met in upstate New York to develop a strategy for bringing Indians into the mainstream of American life. Their decisions set the course for U.S. policy over the next generation and resulted in the near destruction of Native American culture.

“The courts protect citizens, but the Indian is not a citizen, and nothing protects him”
– George Bird Grinnell

By the end of the 19th century, the federal government held virtually unlimited power over American Indians. This power was locally applied by the agents of the Bureau of Indian Affairs. In 1899, anthropologist and founder of the Audubon Society George Bird Grinnell wrote, “An Indian agent has absolute control of affairs on his reservation…more nearly absolute than anything else that we in this country know of. The courts protect citizens, but the Indian is a not a citizen, and nothing protects him. Congress has the sole power to order how he shall live, and where.”