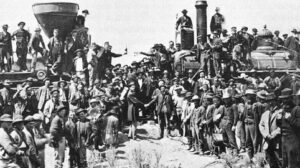 At the Golden Spike ceremony (shown left) at Promontory Point, Utah, on May 10, 1869, linking the railroad routes of the eastern U.S. with California, Chinese railroad workers present at the site were deliberately excluded from the photograph. Hired by the Central Pacific railroad, these Chinese workers operated under the most dangerous conditions, handling explosives used to blast through the Sierra Nevada mountains, resulting in higher fatalities than other workers.

In 1865, the Union Pacific Railroad began laying track, progressing about one mile per day westward. Chinese workers, employed by the Central Pacific in California, provided the labor to push through the mountains. When the two lines were joined in 1869, the Golden Spike was driven at Promontory Point, Utah, completing the Transcontinental Railroad. In 1870, the Union Pacific in Wyoming hired Chinese laborers for $32.50 a month rather than pay $52.00 a month to whites. This kind of treatment caused white laborers in the West to feel that Chinese immigrants were competing unfairly for jobs, which not surprisingly led to years of violent conflict and labor unrest.

“He was not the bloodthirsty man reports from the prairies made him out to be. He asked for nothing but justice…”
– Canadian Mountie James Walsh, upon hearing of Sitting Bull’s death

Sitting Bull, a Native medicine man and a chief of the Lakota, led 1,200 warriors against the U.S. Cavalry at the Battle of Little Big Horn in 1876. After the battle, Sitting Bull led his tribe to Canada where they lived until 1881, when he and his followers surrendered to U.S. troops. Though he briefly toured with Buffalo Bill, when asked to address the crowd, he frequently cursed them in his native Lakota language. Toward the end of his life, Sitting Bull was drawn to the ghost dance religion. Because of that, Indian police were sent to arrest him. In the ensuing fight, Sitting Bull and his son Crow Foot were killed.