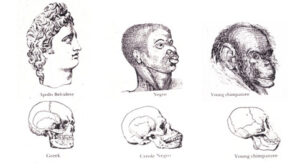 In 1854, Josiah Clark Nott, a physician and surgeon, and George Robins Gliddon, an Egyptologist, published Types of Mankind, popularizing the polygenist theory of separate origins of human races. The argument was refuted by Charles Darwin in 1871 in his book The
Descent of Man.

The mid-nineteenth century marked a period of significant advancement in understanding human biology. Two developments were later appropriated by scientists in developing theories of genetic heritability-Charles Darwin’s publication of The Origin of Species (1859), which provided a theory of evolutionthe transformation of a species of organic life over long periods of time (macroevolution) or... that became the basis for understanding racial diversity, and Gregor Johann Mendel’s experimental work on heredity in plants.

Mendel’s account of the experiments and his conclusions, published in 1866, were largely ignored during his lifetime, but were rediscovered in 1900, and became the basic tenets of geneticsthe study of human heredity, its mechanisms and related biological variation. Heredity may be studied.... In The Descent of Man (1871), Charles Darwin discussed the origins of racea recent idea created by western Europeans following exploration across the world to account for..., and noted naturalists’ great difficulty in determining an exact number of “races.” Darwin, a monogenist on the question of race, believed that all humans were of the same species and found “race” to be a somewhat arbitrary distinction between groups.

Southern doctors Samuel Cartwright, Josiah Clark Nott and James Marion Sims were among the race scientists who gained prominence in the scientific community in the 1850s by legitimizing the exploitation of slaves. Scientific experiments on blacks were routine, a practice that continued in medical and research fields well beyond slaveryan extreme form of human oppression whereby an individual may "own" another person and the.... In the years after the Civil War, southern physicians published scientific studies which sought to prove that blacks were dying out as a race under the conditions of freedom, implying that the system of slavery had been beneficial.

this troublesome practice that many Negroes have of running away can be almost entirely prevented.”
– Samuel Cartwright

Plantation doctor Samuel Cartwright advised whipping and toe amputation as the most effective treatments for drapetomania, a term he coined to describe the tendency of slaves to run away. The slave pictured above was named Peter. The photo was taken in Baton Rouge, Louisiana, in 1863, after Peter had been whipped by a plantation a overseer, resulting in bedsores and permanent scarring.