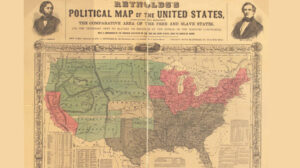 This 1854 map shows slave states (grey), free states (red), and U.S. territories (green) with Kansas at the center. The map represents the territorial compromise of the Kansas-Nebraska Act. A federal law passed on May 30, 1854, the act provided the framework for organizing territorial governments for what would later became the states of Kansas and Nebraska and provided that each territory would decide whether to allow slaveryan extreme form of human oppression whereby an individual may "own" another person and the... or not by popular vote, overturning the Missouri Compromise of 1820.

By the beginning of the 19th century, slavery in the U.S. was firmly established with a series of statutes and penal codes enacted in various states to regulate the activity of slaves and all conduct involving slaves and free blacks. With the Louisiana Purchase, the question of slavery became both geographical and political, and ushered in a period of national debate between pro and anti-slavery states to gain political and economic advantage. But by 1820, Congress was embroiled in the debate over how to divide the newly acquired territories into slave and free states.

The Missouri Compromise–also referred to as the Compromise of 1820-was an agreement between the pro and anti-slavery factions regulating slavery in the western territories. It prohibited slavery in new states north of the border of the Arkansas territory, excluding Missouri. Constitutionally, the Compromise of 1820 established a precedent for the exclusion of slavery from public territory acquired after the Constitution, and also recognized that Congress had no right to impose upon states seeking admission to the Union conditions that did not apply to those states already in the Union. After Missouri’s admission t the Union in 1821, no other states were admitted until 1836 when Arkansas became a slave state, followed by Michigan in 1837 as a free state. Indeed, the debate over slave and free states remained relatively calm for almost 30 years. However by the late 1840s, several events occurred that upset the balance: the U.S. added new territory as a result of the Mexican war, and the question of whether that territory would be slave or free arose again. California, beneficiary of an increased population because of the gold rush-petitioned Congress to enter the Union as a free state. At the same a time, Texas laid claim to territory extending all the way to Santa Fe. Of course Washington, D.C., the nation’s capital, not only allowed slavery but was home to the largest slave market in North America.

In January 1850, Henry Clay presented a bill that would become known as the Compromise of 1850. The terms of the bill included a provision that Texas relinquish its disputed land in exchange for $10 million to be paid to Mexico. The territories of New Mexico, Nevada, Arizona, and Utah were defined while leaving the question of slavery off the table, on the understanding that the issue would be decided when the territories applied for statehood. In addition, the slave trade would be abolished in the District of Columbia, although slavery would still be permitted in the nation’s capitol. It was agreed that California would be admitted as a free state, but the Fugitive Slave Act was passed to mollify pro-slavery states. This bill was the most controversial of all the bills that made up the Compromise of 1850. According its tenets, citizens were required to aid in the recovery of fugitive slaves. Fugitives had no right to a jury trial. The cases were handled by special commissioners, who were paid $5 if a fugitive was released and $10 if the captive was returned to slavery. In addition, the act called for changes that made the process for filing a claim against a fugitive easier for slave owners. The new law was devastating. Many former slaves who had been attempting to build lives in the North left their homes and fled to Canada, which added approximately 20,000 blacks to its population over the following decade. Harriet Jacobs, a fugitive living in New York, described this period as “the beginning of a reign of terror to the colored population.” She was one of the runaways who remained in New York, despite learning that slave catchers had been hired to track her down. Many were captured and returned to slavery, however, including Anthony Burns, a fugitive living in Boston. Even free blacks, too, were captured and sent to the South, completely defenseless with no legal rights. The compromise lasted until the passage of the Kansas-Nebraska Act in 1854, when Illinois Senator Stephen Douglas proposed legislation allowing the issue of slavery to be decided in the new territories.

“the Negro has no rights that a white man is bound to respect.”
– Chief Justice Roger B. Taney’s majority opinion in the Dred Scott case

In the 1857 Dred Scott v. Sanford decision, the U.S. Supreme Court denied citizenship to all slaves, ex-slaves and descendants of slaves and denied Congress the right to prohibit slavery in the territories. The most important consequence of the Dred Scott decision rested in Chief Justice Roger B. Taney’s declaration that Negroes had always been perceived throughout American history as “only property.” He followed with a declaration that has reverberated throughout U.S. history and became the rallying cry of white supremacists, “the Negro has no rights that a white man is bound to respect.”