Here is a picture of Yao Ming and Stan Van Gundy.  They differ in skin color and size.  But the differences in one have nothing to do with the other.  They are independent.  Most traits tend to vary independently of other traits.

Below is a figure designed to illustrate trait independence.  Imagine four traits as the four levels with skin color as the top trait.  The four columns represent four individuals.  If one know the top layer (skin color) one can not predict the deeper layers.

Because we are a highly visual species our brains have assigned a lot of meaning to skin color.  However, this is arbitrary.  A classification based on sickle cell trait might include equatorial Africans, Greeks, and Turks, while another classification based on lactase enzyme deficiency might include eastern and southern Africans with southern Europeans, Japanese, and Native Americans. There is no possibility for consistency. As skin color is only correlated with a few other phenotypic traits such as hair and eye color, it is true to say that ‘race is only skin deep’ (Diamond, 1994). 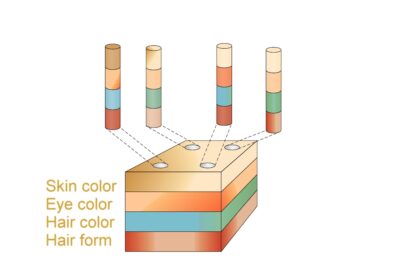