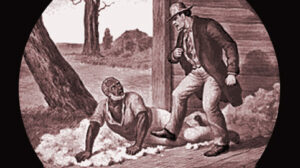 Harriet Beecher Stowe published her famous antislavery novel, Uncle Tom’s Cabin, in 1852. Stowe, inspired by the Fugitive Slave Act of 1850, exposed the horrors of slaveryan extreme form of human oppression whereby an individual may "own" another person and the... with her portrayal of slave owner Simon Legree and the Christ-like Uncle Tom, whom Legree kills. Stowe was careful to attack slavery, not southern whites, which is why she made Simon Legree a transplanted Yankee rather than a southerner. Even so, slave owners were outraged by the book and her published guide to Uncle Tom’s Cabin, in which she demonstrated that fictional events in the book were based largely on fact. Upon meeting Stowe, Abraham Lincoln acknowledged the impact of her writing, saying, “So you’re the little woman who wrote the book that made this great war!”

The Haitian slave revolt of 1791 caused concern for American slave owners, who feared similar rebellions. Slave uprisings in the south intensified from the early 1800s until the Civil War, as did the abolitionist movement and efforts of the Underground Railroad. The division between North and South was further amplified by northerners who found it easy to be critical of southern slave owners, since most northern slaves already had been freed. Many northern abolitionists were Christians, and believed it was their God-given duty to protect the slaves. Southern proponents of slavery resented northern posturing in the debate over slavery, arguing that northerners would not experience the negative economic impact of manumission (emancipationfreedom from legalized slavery gained by most enslaved persons of African descent immediately following the... of slaves) since their slaves were already free.

In some parts of the South, slave populations roughly equaled or exceeded that of whites, and resistance to slavery was growing and becoming more violent. Since colonial times, South Carolina had been home to a sizable population of free blacks, many of whom were descended from white masters. Some were freed voluntarily thanks to years of faithful service, while others purchased their freedom. But as long as there were free blacks, their presence concerned the white population.

– the slogan for William Lloyd Garrison’s abolitionist newspaper, The Liberator.

Perhaps best known as the editor of The Liberator, abolitionist William Lloyd Garrison was one of the founders of the American Anti-Slavery Society. While Garrison and Frederick Douglass shared some abolitionist views, they differed in their views of the Constitution and slavery. Douglass believed that emancipation was a Constitutional mandate, while Garrison found the document to be pro-slavery. The two finally reconciled their opinions in the 1870s.