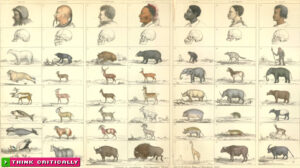 Published at the height of polygenism’s popularity, Josiah Nott and George Gliddon’s 800-page illustrated volume, Types of Mankind (shown left), reproduced the work of Louis Agassiz and Samuel Morton, spreading racist views to a popular audience. The work sold well and nine editions were printed. Some slave owners found justification for slaveryan extreme form of human oppression whereby an individual may "own" another person and the... in the Bible, and others used this new “science” to defend it.

By the 19th century, the scientific debate focused on whether human biological difference was just a racial variation, or represented an entirely different species. The “species” theory, polygenism, held that human “races” were of different lineages and suggested a hierarchy outlined in the “Chain of Being” that positioned Africans between man and lower primates.

Polygenism was the antithesis of monogenism, which espoused a single origin theory of humanity consistent with the Bible. Ironically, proponents of slavery were, for the most part, monogenists, because polygenypre-evolutionary scientific argument that human biological "races" are separate species, each descended from different biblical... was incompatible with the Bible.

Edward Long published History of Jamaica in 1774 in England; excerpts were reprinted in the U.S. in 1788. In History of Jamaica, Long compared blacks to animals and outlined a racial hierarchy where blacks were situated between Europeans and orangutans. Long, along with Dr. Charles Whites’ Account of the Regular Gradation in Man in 1799, provided the “empirical science” for the species theory. White defended the theory of polygeny by refuting French naturalist George Louis de Buffon’s interfertilitythe ability to interbreed or mate and produce fertile offspring. All humans are members of... argument-the theory that only the same species can interbreed-pointing to species hybrids such as foxes, wolves and jackals, which were separate groups that were still able to interbreed.

Naturalist Charles Pickering was the librarian and a curator of the Academy of Natural Sciences. In 1843, he traveled to Africa and India to research human races. In 1848, Pickering published Races of Man and Their Geographical Distribution, which enumerated eleven races.

“I experienced pity at the sight of this degraded and degenerate race..”
– Louis Agassiz

French naturalist George Louis de Buffon published Histoire naturelle (Natural History) in 1749. Buffon theorized that African skin tone was a result of the intense tropical sun. In Natural History, he also considered the similarities between humans and apes and the possibility of a common ancestry. Perhaps his most significant contribution to the race debate was in recognizing the interfertility of different races. Interfertility undermined the polygenist theory that each race was a different species, since interracial offspring would have been impossible under polygenism.