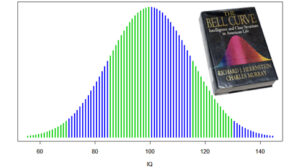 In 1994, the controversy over racea recent idea created by western Europeans following exploration across the world to account for... and intelligencethe innate potential to learn and solve novel problems. reemerged with the publication of The Bell Curve, a controversial book by Richard J. Herrnstein and Charles Murray, that explored the role of intelligence in understanding social problems in the U.S. The title was a reference to the bell-shaped graph of IQ scores and purported to chronicle the rise of a “cognitive elite,” a social classa social grouping of people based on common economic and other characteristics determined by society... with high intelligence and an increasingly high chance of success that favored those of European and Asian ancestry.

Arthur Jensen, a protégé of British educational psychologist Cyril Burt and an educational psychologist at University of California-Berkeley, was well known for his work in psychometrics and differential psychology. In the “nature versus nurture” debate, Jensen took a hereditarian position, claiming that geneticsthe study of human heredity, its mechanisms and related biological variation. Heredity may be studied... played a important role in behavioral traits, such as intelligence. He published a controversial work in 1969 called “How Much Can We Boost I.Q. and Scholastic Achievement?” The opinion he put forward in the publication was that over 70% of the within-race IQ variability was due to genetics, and the rest due to environmental influences, and that as a result programs designed to boost black IQ had failed, simply because the 1Q of African Americans could not be increased.

“…Our ways of learning about the world are strongly influenced by the social preconceptions and biased modes of thinking that each scientist must apply to any problem. The stereotype of a fully rational and objective ‘scientific method,’ with individual scientists as logical robots, is self-serving mythology.”

– Stephen J. Gould, “In the Mind of the Beholder,” Natural History, February 1994

Paleontologist, evolutionary biologist, and historian of science Stephen J. Gould was an immensely influential and widely read writer of popular science. He opposed pseudoscience in the service of racism, which he saw as a form of cultural oppression. Along with Niles Eldredge, Gould helped develop the theory of punctuated equilibrium in 1972. This theory postulates that evolutionary change occurs relatively rapidly in comparatively brief periods of environmental stress, separated by longer periods of evolutionary stability.