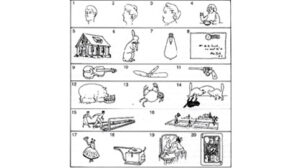 Part Six of the beta IQ test (shown left), developed by psychologist Robert M. Yerkes, was given to Army recruits to determine their innate intelligencethe innate potential to learn and solve novel problems.. Yerkes intelligence exams (alpha, beta and individual) were culturally biased, taken under markedly different conditions and tended to reflect years in the U.S. and familiarity with dominant cultureThe full range of shared, learned, patterned behaviors, values, meanings, beliefs, ways of perceiving, systems..., rather than innate intelligence. Nevertheless, the early 20th century IQ exams have been the basis for standardized tests ever since.

Beginning in the 1900s, scientists began to develop different methods for measuring intelligence. These tests were used often to justify racial and ethnic discriminationpolicies and practices that harm and disadvantage a group and its members.. The results of these intelligence tests were influential in shaping U.S. immigrationthe act of entering a country of which one is not a native to become... policy that limited immigrants from Southern and Eastern Europe, and in justifying race-based segregation in public education, and U.S. conscription during World War I. Previously, the scientific debate centered largely on perceived differences in racial intelligence based on cranial size.

French psychologist Alfred Binet is credited with creating the first modern intelligence test, the Binet-Simon intelligence scale, in 1905. Binet’s objective in developing the test was to identify students who needed special help in school. However, Binet recognized the limitations of the test in understanding cognition and intellect; he did not intend that the test be used a measurement of intelligence. Binet and his colleague Theodore Simon published revisions of the intelligence scale in 1908 and 1911. Lewis M. Terman of Stanford University, a prominent eugenist (“eugenics” is the science of improving a human population through selective breeding) and member of the Human Betterment Foundation, published his refinement of Binet-Simon scale in 1916. Terman incorporated German psychologist William Stern’s concept that mental age/chronological age times 100 would quantify intelligence, thus creating the intelligence quotient or IQ. Terman’s test, which he renamed the Stanford-Binet Intelligence Scale, formed the basis for one of the modern intelligence tests, although IQ is calculated differently today.

Harvard-educated psychologist, ethologist and primatologist, Robert Means Yerkes, known for his work in Army intelligence testing in World War I and in the field of comparative psychology, was an early standout in the field of primate intelligence and chimpanzee and gorilla behavior. The theory of behaviorismA school of thought in psychology emphasizing the importance of overt behavior responses over conscious... was developed by Yerkes and his colleague John B. Watson.

… the term intelligence designates a complexly interrelated assemblage of functions, no one of which is completely or accurately known to man…”
– From The Great Apes: A Study A of Anthropoid Life byRobert Yerkes, co-authored with Ada Yerkes, his wife.

Known for his work in comparative psychology involving primates, Robert Yerkes chaired the committee of the American Psychological Association that developed World War I army intelligence tests. Although he was influenced by Darwin, Yerkes subscribed to eugenicists ideas and believed that genetics would improve society.