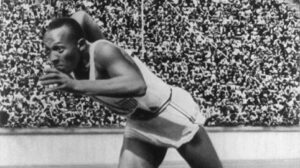 Physical anthropologist William Montague Cobb made significant contributions to the debate on racea recent idea created by western Europeans following exploration across the world to account for... and athletics. He used anthropometric measurements to establish that race was insignificant to athletic achievement. He compared the calf muscles of Jesse Owens (pictured at left), celebrated for his accomplishments in track and field in the 1936 Berlin Olympics, to other European athletes. His findings indicated that training, rather than specific “racial traits,” accounted for athletic success.

In the late nineteenth century, John Wesley Powell led the Bureau of American Ethnology at the Smithsonian Institution, which dominated the field of anthropologyThe study of humans and their cultures, both past and present. The field of anthropology... in the U.S. at the time. Powell and his curator for ethnology, Otis T. Mason, v proponents of Lewis Morgan’s theory of cultural evolution-the idea that the social progress of a cultureThe full range of shared, learned, patterned behaviors, values, meanings, beliefs, ways of perceiving, systems... is inextricably linked to technological progress. Franz Boas, often considered the father of American anthropology, opposed Morgan’s theory and introduced new ideas about the evolutionthe transformation of a species of organic life over long periods of time (macroevolution) or... of cultures, as well as organization and classificationThe ordering of items into groups on the basis of shared attributes. Classifications are cultural... of artifacts.

By the 1930s, hereditarianism-the theory that heredity was the basis for differences in intelligencethe innate potential to learn and solve novel problems. and behavior-began to fall out of favor. To counter the rise of Nazism and its racist ideologies, scientists critical of the use of race to justify oppression and discriminationpolicies and practices that harm and disadvantage a group and its members. published a number of important works. We Europeans: A Survey of “Racial” Problems (1935) by Julian Huxley and A.C. Haddon, sought to show that science offered a very limited definition of race. Another work during this period, The Races of Mankind by Ruth Benedict and Genea unique combination of bases (see base pairs) that creates a specific part of our... Weltfish, argued that though there were some racial differences, they were primarily superficial, and did not justify racial prejudice. The hereditarian theory was further discredited when Boas showed significant increases in cranial size in the U.S. from one generation to the next, undermining the notion that geneticsthe study of human heredity, its mechanisms and related biological variation. Heredity may be studied... and race determined intelligence.

“..there is nothing at all that could be interpreted as suggesting any material difference in the mental capacity of the bulk of the Negro population as compared with the bulk of the White population.”
– Franz Boas, from his 1938 edition of The Mind of Primitive Man