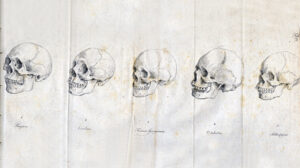 Expanding on the work of Carolus Linnaeus, German professor of medicine Johann Friedrich Blumenbach introduced one of the race-based classifications in On the Natural Variety of Mankind. In the second edition Blumenbach changed his original geographically based four-race arrangement to a five-group one that emphasized physical morphology (the study of the form of an organism). Blumenbach’s five categories were: CaucasianA non-scientific term invented by German physician Johann Blumenbach in 1795 to describe lightskinned people..., the white race; Mongolian, the yellow race; Malayan, the brown race; Ethiopian, the black race; and American, the red race. Although he retained geographical names for his categories, the change marked a shift from geography to physical appearance.

The age of Enlightenment provided the backdrop for eighteenth century European theories about human difference. Exploration of Africa, Asia and the Americas brought Europeans in contact with people whom they found quite different. The rise of prominent Enlightenment thinkers including Voltaire, Jean-Jacques Rousseau, Immanuel Kant and David Hume, among others-greatly influenced European ideas about economics, government and science. The framework of Enlightenment philosophy in Europe was the belief that reason and rationality provided an authoritative system of ethics, aesthetic values and knowledge.

“Hence those marks which distinguish men who inhabit different regions of the earth, are not original, but purely superficial.”
-George Louis de Buffon

French naturalist George Louis de Buffon published Histoire naturelle (Natural History) in 1749. Buffon theorized that African skin tone was a result of the intense tropical sun. In Natural History, he also considered the similarities between humans and apes and the possibility of a common ancestry. Perhaps his most significant contribution to the race debate was in recognizing the interfertilitythe ability to interbreed or mate and produce fertile offspring. All humans are members of... of different races. Interfertility undermined the polygenist theory that each race was a different species, since interracial offspring would have been impossible under polygenism.