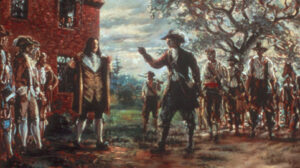 From 1675 to 1676, Nathaniel Bacon led a group of indentured laborers-both black and white-who were frustrated with their economic plight, in a series of raids against nearby Indians to confiscate their land. The rebels soon turned their anger against wealthy Virginia planters, who quickly recognized the potential for widespread unrest. Shortly after Bacon died in 1676, the revolt collapsed. Recognizing the need for a permanent indentured labor force, Virginia’s planters and colonial leaders strengthened a system of African slaveryan extreme form of human oppression whereby an individual may "own" another person and the... that survived for nearly two hundred more years.

From 1689 to 1763, England and France waged a war in Europe that extended to their respective colonies across the Atlantic. Known as the French and Indian Wars, these battles were largely fought by Indian allies of each country. Although the British prevailed, they quickly came to view their Indian allies as “savages.” The English already had a well-developed sense of “savagery” from their long history with the Irish. They simply transferred their cultural attitudes and beliefs about the Irish to the Indians.

At the time, “captivity narratives” were popular among the colonists. The storyline usually involved an English woman, representing Puritan virtue, being captured by Indians. Faced with the choice of marriage to a “savage” or becoming an Indian sacrifice, the captive was ultimately saved and returned to “civilization,” providing a metaphor for Puritan beliefs about temptation, redemption and salvation. Among the more popular captivity novels of the time were: Cotton Mather’s Humiliations Follow’d with Deliverances (1697); The Redeemed Captive (1704) by John Williams; and Jesuit Relations, a serial published by Jesuit missionaries from 1632-1673. Captivity narratives were a means of religious expression, reinforced Indian stereotypes, reflected cultural bias and justified the exploitation of Indians to satisfy European westward expansion.

The first recorded arrival of Africans in the Virginia colony was in 1619, when a Dutch warship brought 20 blacks captured from a Spanish slave ship, including three women, Jamestown. Though not much is known about them, many of these early African arrivals had already been assimilated into European cultures. Some had Spanish or Portuguese names and spoke those languages. They came as agricultural laborers, but some of them may have been servants and easily fit into the system of indentured labor that was devised for poor Europeans.

During the 17th century, English workers came to Virginia in the thousands to work for at least six years as servants and laborers in return for passage to the New World. Black slaves and white indentured laborers worked along side each other on Virginia’s farms and tobacco plantations during the first 30 years of the colony’s history. African slaves and indentured Europeans were even known to marry and have children. More than a few slaves earned their freedom, acquired land or worked as skilled laborers for themselves. Indeed, the line between slavery and freedom was not always clearly defined in the early years. For the first 60 or 70 years after Jamestown was settled, the English used the terms “servant” and “slave” interchangeably. But by the 1660s, black captives were typically treated as slaves. They were assigned different work than whites and were no longer listed in ledger books or population counts with surnames, unlike white indentured servants. More importantly, a number of slave codes, or laws aimed at defining in detail the lives of enslaved persons, were enacted.

“Sinners in the Hands of an Angry God” was the most famous of the fire-and-brimstone sermons, first preached in 1741 by Jonathan Edwards, a prominent Calvinist minister, in Enfield, Connecticut. It a was a powerful expression of the Calvinist theology of the First Great Awakening. The period of the Great Awakening extended the reach of religion to the poor, native Indians and blacks, all of whom had been spurned by other sects. After the initial wave of religious fervor, enthusiasm peaked in Virginia in the 1760s. The Revolutionary War displaced religious evangelism.