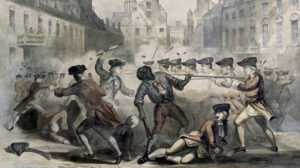 A runaway slave of African and Indian ancestry, Crispus Attucks became the first casualty of the American Revolution in 1770, when he was shot and killed in the skirmish that later became known as the Boston Massacre. Attucks was acknowledged as the leader and instigator of the uprising, but for the next hundred years it was hotly debated whether he was a patriot, or merely a rabble-rouser.

While American colonists waged war against the British, some patriots recognized the irony of their struggle for independence amid widespread slaveryan extreme form of human oppression whereby an individual may "own" another person and the.... “To contend for liberty,” wrote John Jay, one of the founding fathers, “and to deny that blessing to others involves an inconsistency not to be excused.”

During the Revolutionary War, the British actively recruited slaves–among them, those who belonged to George Washington. Virginia’s royal governor, Lord Dunmore, proclaimed that all slaves willing to bear arms for Britain would be granted their freedom. Slaves deserted in droves, and those who fought for Dunmore wore “liberty to slaves” emblazoned on their coats. When Washington took command of the Continental army in 1775, he initially banned the recruitment of black soldiers despite the fact that they had fought at Lexington, Concord and Bunker Hill. Indeed, one of the first casualties of the American Revolution was Crispus Attucks, a runaway slave who was killed in the Boston Massacre in 1770.

By war’s end, the British had abandoned their black soldiers, many of whom died or were recaptured as slaves. Some of them, however, escaped to New York, a British stronghold. Washington insisted that the British return the slaves to their masters, but the last commander of British forces in America managed to negotiate their freedom, and they embarked on British ships bound for Nova Scotia.

…blacks, whether originally a distinct race, or made distinct by time and circumstances, are inferior to the whites in the endowments both of body and mind.”
– Thomas Jefferson, from Notes on the State of Virginia

In 1776, the Continental Congress voted to halt the slave trade, but their aim was to cripple the British economy, not emancipate African slaves. Thomas Jefferson, himself a slaveholder who fathered children with his slave Sally Hemming, wrote a lengthy indictment of slavery, but the language was removed from the final version of the Declaration of Independence. However, in 1781, he observed in Notes on the State of Virginia, “I advance it therefore as a suspicion only, that the blacks, whether originally a distinct race, or made distinct by time and circumstances, are inferior to the whites in the endowments both of body and mind.” Early scientific ideas about race were delineated by Jefferson’s notes.