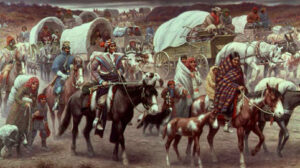 By 1838, General Winfield Scott began the removal of the remaining Cherokee Indians from the South to what is now Oklahoma. Forced to travel thousands of miles during the bitter winter, thousands of Cherokees died during the journey in what has been called the Trail of
Tears.

Among the most detrimental policies for Native Americans in U.S. history began in the early 1800s. By 1830, Andrew Jackson had signed the Indian Removal Act, which authorized a plan to appropriate Indian land, a practice that had been followed since Europeans arrived in North America. The idea of segregating Indians onto poor land was first suggested by Thomas Jefferson after the Louisiana Purchase. Thus began a system of appropriating Indian land and undermining Indian cultureThe full range of shared, learned, patterned behaviors, values, meanings, beliefs, ways of perceiving, systems... that has been expressed throughout U.S. history. Although many Indians had taken on European cultural traits, including religious conversion and worked their land using white methods, they were still considered incapable of assimilating into white society. Despite continuing efforts by Europeans to convert Indians to Christianity, they continued to be viewed as heathens in both popular cultural and society.

“John Marshall has made his decision, now let him enforce it!”
– Andrew Jackson

Population growth and the discovery of gold on Cherokee lands in the South increased pressure on tribal lands, and made the Indian Removal Act especially popular there. In 1832, however, the U.S. Supreme Court ruled in Worcester v. Georgia that Georgia could not impose its laws on Cherokee tribal lands. It is questionable whether Andrew Jackson’s oft-quoted reaction to the decision, “John Marshall has made his decision, now let him enforce it!” is historically accurate, but it is untrue that he actually defied the Supreme Court. Instead, he used the Georgia dispute to pressure Cherokee leaders into signing a removal treaty. Although the treaty was rejected by most Cherokees, a faction led by Jackson’s longtime ally Major Ridge negotiated the Treaty of New Echota with Jackson’s administration. Jackson’s successor, Martin Van Buren, strictly enforced the terms of the treaty, resulting in ‘The Trail of Tears.”