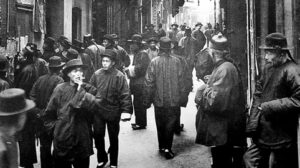 Tens of thousands of Chinese immigrants, many Cantonese, came to San Francisco, California, in the 1850s to participate in the gold rush. They viewed California as another place to practice their trade. However, anti-Chinese racial prejudices among miners grew in the midst of the gold frenzy. The Alta California, a San Francisco newspaper, criticized the concentration of Chinese immigrants, or “Chinatown,” that emerged in the city. Further anti-Chinese sentiment hampered economic prospects as Chinese miners were only allowed to work on sites abandoned by white miners.

After the Texas War of Independence ended in 1836, tensions between the U.S. and Mexico increased. Before gaining independence, Texas had been a refuge for runaways but eventually became a slave state. The concept of “Manifest Destiny”the idea that the U.S. had the divinely granted right tr expand geographically from Atlantic to Pacific–was well-entrenched by the time James K. Polk became President in 1845; indeed, he had run on an aggressive expansionist platform. The fact that most of the Mexican territories were already inhabited was largely ignored. Many believed that the Protestant, English-speaking Americans were better equipped to govern the Mexican territories than American Indians or Catholic, Spanish-speaking Mexicans. In 1835 and 1845, the United States tried to purchase New Mexico and California from Mexico. But the Mexican government refused. From 1846-1848 the U.S. fought the Mexican-American War, eventually acquiring the territories of California and New Mexico.

“… that claim is by the right of our manifest destiny to overspread and to possess the whole of the continent which Providence has given us for the development of the great experiment of liberty and federated self-government entrusted to us.”
– John Louis O’Sullivan, as published in a New York Morning News column

John Louis O’Sullivan was the founder and editor of the Democratic Review, a literary magazine that published Ralph Waldo Emerson, Henry David Thoreau, Walt Whitman and Nathaniel Hawthorne. Active in New York politics early in his career, O’Sullivan advocated abolishing the death penalty and promoted reform of New York City public schools, as well as rights for women and working people. Years later he became a staunch defender of slavery and while in Europe, supported the Confederacy during the Civil War. Many believe he was on their payroll. He returned to the U.S. in the late 1870s, but was unsuccessful in reviving his political career. O’Sullivan is credited with coining the phrase “Manifest Destiny” in an 1845 essay published in the Democratic Review.