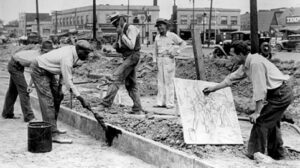 The Works Projects Administration (WPA) was created in 1935 by presidential order. It was the largest New Deal agency, employing millions of people. During the economic recovery that followed the Great Depression, the share of Federal Emergency Relief Administration and WPA benefits going to blacks exceeded their proportion of the general population. By 1935, about forty percent of the nation’s black families were either on relief or were employed by the WPA, having been disproportionately devastated by the Depression.

The New Deal programs of the 1930s helped revive the U.S. economy after the Great Depression. In 1935, the Social Security Act provided retirement benefits for U.S. workers, but domestics and farm workers were initially excluded from eligibility, a policy that largely affected blacks and Latinos.

The GI Bill of Rights or the Servicemen’s Readjustment Act of 1944, which provided for college and vocational education for returning World War II veterans as well as one-year of unemployment compensation, resulted in an expansion of the middle class. The Gl bill also provided loans for returning veterans to buy homes and start businesses, but non-whites were widely discriminated against in these programs. The legacy of discriminationpolicies and practices that harm and disadvantage a group and its members. in these programs served to create and maintain the wealth gap between whites and non-whites, which is reflected in rates of home ownership, assets, savings and investment even today.

“Courage is something strong within you that brings out the best in a person. Perhaps no one else may know or see, but it’s those hidden things unknown to others, that reveals a person to God and self.
– Diary entry for May 3, 1942, written by Yuri Nakahara Kochiyama while in a Japanese internment camp in the U.S.