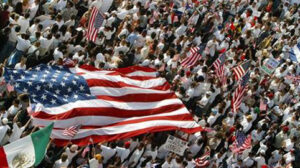 In 2006, millions rallied in cities across the country to protest anti-immigrant legislation (shown left), but there a has been a backlash against what some see as an economic issue largely focused on Central American immigrants. Recently, Congress has considered several immigrationthe act of entering a country of which one is not a native to become... reform proposals, including temporary work permits for foreigners outside the U.S., and a bill that would allow illegal residents already here to pay a fine and work, with the possibility of legal residency. In September 2006, the Senate passed a measure that would build a 700-mile wall along the 2,000-mile U.S.
Mexico border.

The Immigration Act of 1990 increased legal immigration annually from 500,000 to 700,000, although it still favored those with family members already in the U.S. The measure strengthened the U.S. Border Patrol, but eliminated language that barred people with AIDs from entering the country. The Illegal Immigration Reform and Immigrant Responsibility Act of 1996 provided the framework for U.S. immigration policy that would follow in the post-9/11 era. In 1992, Congress passed the North American Free Trade Agreement (NAFTA) intended to create a free-trade bloc among the U.S., Canada and Mexico. However, the agreement raised concerns in the U.S. about immigration from south of the border. The 1996 Welfare Reform bill included anti-immigrant and other measures that eliminated many social services for undocumented immigrants. In 2001, the U.S. government initiated a series of immigration policies under the Patriot Act that were designed to thwart terrorism after the 9/11 attacks. The measure was again renewed in 2005, allowing the government greater latitude in suspending civil rights. Racial profilingthe use of race (and often nationality or religion) to identify a person as a..., which for the most part had targeted blacks and Latinos, was extended to other groups, particularly Muslim, Arab and south Asian immigrants.

Senator Kennedy is a co-sponsor of an immigration reform bill that would restructure the immigration system and deal with undocumented workers.
Undocumented immigrants who are currently living and working in the United States can achieve legal status, according to one provision, but it is a more stringent process than required in previous immigrant legalization legislation. The most controversial element of the bill will allow approximately 400,000 guest workers annually into the U.S. to work in low-skill jobs.