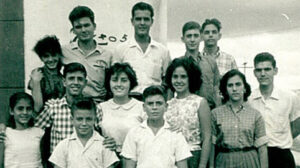 Operation Peter Pan (Operación Pedro Pan), was a program coordinated by the U.S. government, the Catholic Church and Cuban exiles, in which over 14,000 children were brought from Cuba, after Fidel Castro came to power in 1959, and resettled with adoptive families in the U.S. Rumors that Cuban children would be sent to Soviet work camps were aired on U.S.sponsored radio broadcasts to Cuba. Historians have argued that the U.S. visa waiver program deliberately spread the rumors that children would be taken from their parents by the Cuban government, so as to foster a climate of anti-Soviet, anti-Communist sentiment in Cuba.

While the federal government began to address centuries of racial discriminationpolicies and practices that harm and disadvantage a group and its members. through the courts in cases such as Brown v. Board of Education, which overturned the ‘separate but equal” doctrine in Plessy v. Ferguson, Congress began to address the reality of institutional racismthe embeddedness of racially discriminatory practices in the institutions, laws, and agreed upon values and... throughout the U.S. Motivated by the Civil Rights movementLegal and other efforts led by African Americans against racism and segregation and for the... of the 1950s and 60s and the media attention it garnered-from the Montgomery bus boycott, to 1 Birmingham bombings, to the March on WashingtonCongress enacted two significant measures that, initially, were designed to overturn race-based discrimination against blacks, but have provided the basis for civil rights for all U.S. citizens. The first was the Civil Rights Act of 1964, which barred discrimination in public facilities and employment, and the second was the Voting Rights Act, which was enacted a year later, barring practices aimed at disenfranchising black voters.

In 1965 the Immigrationthe act of entering a country of which one is not a native to become... and Nationality Act of 1952, known as the Hart-Celler Act, was amended to effectively repeal quotas based on national origins. Previously, up to two percent of a foreign country’s population was permitted to immigrate into the U.S. Instead of relying on classificationThe ordering of items into groups on the basis of shared attributes. Classifications are cultural... by nationality and ethnicityan idea similar to race that groups people according to common origin or background. The..., the new amendments created a system which took into account the reunification of families and skills which were needed in the U.S. The revised Act also changed from percentages to hard numbers, making the maximum number of immigrants from the eastern hemisphere 170,000, with no more than 20,000 from any country allowed in during each year. Since then, the most immigration to the United States has shifted, coming from Latin America and Asia rather than Europe.

“Blood will run in the streets.”
– Arkansas Governor Orval Faubus on September 2, 1957 when he accurately predicted violence if black students tried to integrate Central High School in Little Rock.

After ordering the Arkansas National Guard “to maintain or restore the peace and good order of this community,” Governor Faubus watched as a mob of about 400 whites showed up to jeer the nine black students who were supposed to integrate Central High School in Little Rock, Arkansas. The National Guard let white students in and turned the black students away. Fifteenyear-old Elizabeth Eckford, who arrived alone had to walk a gauntlet of whites who shouted “Nigger go home!” and “Hang her black ass!” In the fall of 1958 Governor Faubus closed all Little Rock schools for the year rather than desegregate the city’s schools. He won reelection by an overwhelming majority and won six terms as governor. In the South today, 71 percent of black students attend schools with nonwhite majorities, and in urban areas segregation is even greater.